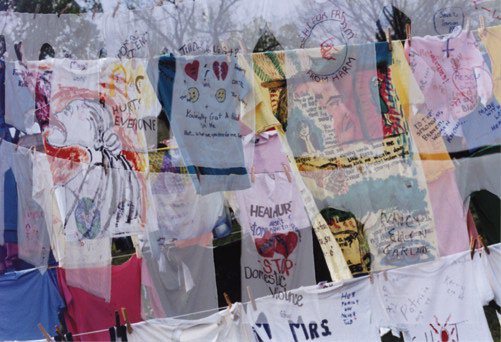 The Clothesline Project began when a small core of women found a way to take the staggering, mind-numbing statistics on violence against women and turn them into a striking and memorable teaching tool that honors survivors and victims, and raises consciousness.

Inspired by the AIDS quilt, they came up with the idea of using t-shirts hanging on a clothesline—each made by survivors and their supporters and each with a message. “Doing the laundry has always been considered women’s work, and in the days of close-knit neighborhoods, women often exchanged information over backyard fences while hanging their clothes out to dry,” says Carol A. Chichetto, chair of the project's steering committee. “The concept was simple—let each woman tell her own story, in her own unique way, and hang it out for all to see. It was and is a way of airing society's dirty laundry.”

The shirts are color coded to highlight different types of violence:

The Clothesline Project collection at the University of Illinois has been built over many years by students and community members willing to tell their own stories. Annually, we display the Clothesline Project on campus and in the local community, traditionally as part of our Domestic Violence or Sexual Assault Awareness Month programming.

To contribute a t-shirt to the project or set up a display at your location, please contact the Women’s Resources Center or call 217.333.3137.

Office of Inclusion and Intercultural Relations | University of Illinois at Urbana-Champaign | 217.333.1300 | Privacy Notice